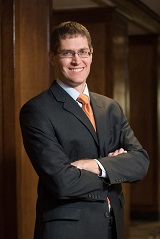 I grew up in Washington state and Alabama before studying philosophy at Christendom College in Front Royal, VA. I then earned an MA and PhD in philosophy at the University of Notre Dame, studied for a year at Oxford and taught at the Catholic University of America and Xavier University. I have been at Providence College since 2011, where I now help direct the Humanities Program. I have grown to love New England, and particularly enjoy visiting Rhode Island's beaches with my wife Dominique and our children Madeleine, Raymond Jr., Juliette, Benedict, and Angelica.

Hain, R. (2019) Beyond the Self: Virtue Ethics and the Problem of Culture. Waco, TX: Baylor University Press

Hain, R. (2016) Justice in the Public Square: Towards an Aristotelian Ethics of the Built Environment. International Journal of Applied Philosophy.(30), 149-162.

Hain, R. . The Florida State University chapter of the Thomistic Institute, Tallahassee, FL - "An Unjust Law Is No Law At All" March, 2020

Hain, R. Twentieth Annual Conference of the Notre Dame Center for Ethics and Culture: I Have Called You Friends. University of Notre Dame, Notre Dame, IN - "Strong As Death Is Love: Friendship in the Life and Writings of Walker Percy" November, 2019

Hain, R. . The Massachusetts Institute of Technology chapter of the Thomistic Institute, Cambridge, MA - "Does Nature Make Laws?: An Introduction to the Natural Law Tradition" October, 2019

Hain, R. . The Thomistic Institute and the Harvard-Radcliffe Catholic Students Association, Cambridge, MA - "An Unjust Law Is No Law At All" November, 2017

Hain, R. Fourth Annual St. Nicholas of Myra Conference on Catholic Social Thought: Option for the Poor – The Council of Medellín for the 21st Century. , Providence College - "Some Philosophical Reflections on ‘The Preferential Option for the Poor’" November, 2017

Hain, R. Virtue, Medicine, and Modern Moral Philosophy. , South Bend, IN - "Panel: Foundations of the Case Against PAS" May, 2014

Hain, R. The Crowning Glory of the Virtues: Exploring the Many Facets of Justice. , South Bend, IN - "Saving the One Over the Many: Problems with Consequentialist Forms of Justice" November, 2012